The first thing to realize is that restoration is a process. If you can’t afford complete restoration, do a little at a time. What’s important is to move forward. What you don’t finish the next owner will. If we look at ourselves as temporary caretakers of beautiful buildings that will long outlast us, that will give us the correct perspective. The two projects described here, one long-term and relatively expensive, the other quick and less expensive (nothing to do with building restoration is cheap), show the value of the facade beautification.

The contractors for the first project, the home of the Audrey and Robert Nevitt at 1000 South Carolina Avenue, SE were the David Mahoney Painting Company and Bricklands brick repair specialists.

The Nevitts hired David Mahoney to repaint the exterior of their home; the white paint was peeling badly. The painters began by scraping and washing the brick and then scrapping and washing again to get down to a firm surface. It became obvious that the brick would need extensive repointing. Also the severity of the paint failure led Mahoney to recommend completely stripping down to the original brick and completely repointing.

Bricklands, a company which specializes in historic repointing, was called in for this part of the job. It was determined that the original color of the mortar was black. Bricklands matched this and repaired many damaged bricks.

Then the David Mahoney Painting Company fabricated some missing decorative details on the facade such as the metal cornices on the windows and the detail work on the cornice. The window frames were stripped and repainted and the security bars were sandblasted and repainted. The project took three months to complete. 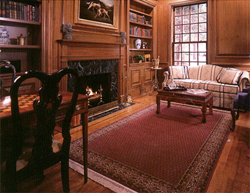